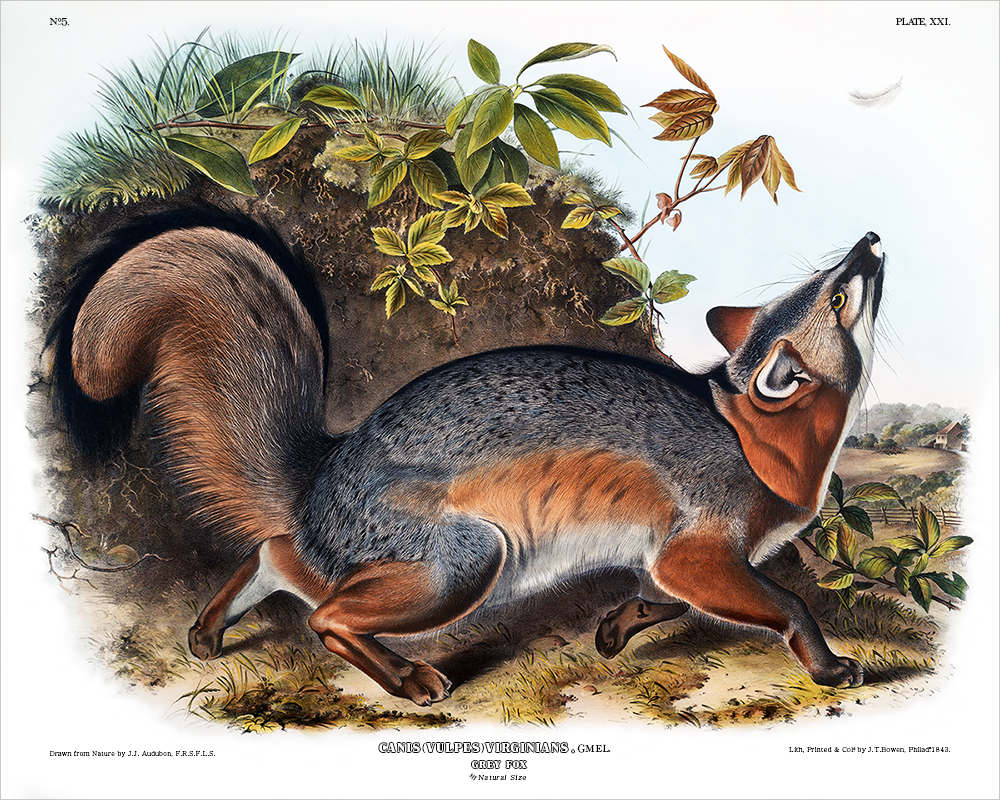 The Viviparous Quadrupeds of North America

In the 1830’s as the final plates were being completed for John James Audubon’s monumental Birds of America series, the artist began to gather material for his second and equally ambitious undertaking. Planning to complete the definitive study of American wildlife, Audubon set out to document the animals of North America, and to present them in a format as impressive and sweeping as that he used for his birds. The result of the artist/naturalist’s years of field research, travel, and seemingly endless study was the Viviparous Quadrupeds of North America, the outstanding work on American animals produced in the 19th century.

Despite his newly acquired wealth and celebrity, Audubon insisted on executing many of the preparatory drawings and watercolors personally, enlisting a select few to help. The contributors to the project included Bachman, a Lutheran minister who had been the artist’s closest friend and supporter for many years, who wrote all of the descriptions and acted as a scientific editor for the work. Audubon’s two sons, John Woodhouse and Victor, also took critical roles. With his sons, Audubon traveled through the Eastern woodlands, and through Missouri to the Rocky Mountains. Together they collected and drew specimens along the Mississippi, as well as in coastal regions of Florida and the East Coast.

As Audubon’s health and eyesight began to fail, the help of John Woodhouse and Victor became increasingly crucial to the Quadrupeds, now a family project. Audubon managed to complete seventy seven drawings before failing health kept him from his work. Before he died in 1851, Audubon’s sons managed to solicit some three hundred subscriptions for the Quadrupeds. Together, the three men, along with John Bachman, produced an unequaled record of American wildlife, matching the great combination of art and science attained in the Birds of America. Like that series, the Quadrupeds are wonderfully animated, superbly rendered, and beautifully printed in large format.

The Quadrupeds, as Audubon envisioned, would complete his record of the animal life of North America. The artist’s enthusiasm at the start of the Quadrupeds was unbounded. In 1840, Audubon wrote to his friend and collaborator John Bachman, “I am growing old, but what of this? My spirits are as enthusiastical as ever, my legs fully able to carry my body for ten years to come…Only think of the quadrupeds of America being presented to the World of Science by Audubon and Bachman.”

The elephant folio edition of Audubon’s Quadrupeds will always be compared to the incomparable Birds . It should be judged in its own right, as one of the grandest American works of natural history ever produced, and one of the greatest American illustrated works ever created.

Warning: count(): Parameter must be an array or an object that implements Countable in C:\CustomerData\webspaces\webspace_00245350\wwwroot\orchardarts.com\wp-includes\class-wp-comment-query.php on line 399